A downloadable game for Windows

Exiles is a Survival Horror game.

Please keep in mind that I am developing this game only by myself so progress will be slow. Anyone who is interested in helping, let me know.

If you have any suggestions or questions, please let me know in the comment.

Any donations would be appreciated to help with the development of the project.

Hi
I liked the graphics of the game, and the balance between dark and lit areas because it is annoying when games become too dark to even see what's going on.
Some things i want to point out
1. When zombie attacked me and i lost some health, the dark atmosphere, plus the screen with blood splatter made it difficult to see anything around. Also bullets and machete didn't work.

2. Its a lot of find this key and open the door to move on and do the same thing again, i hope you add interactable things other than that to make it more interesting.
Besides that, as an architecture student, i found some details in the game pretty interesting, for eg, the narrow staircases which did create an uncomfortable environment.
Gladly waiting for the full game! All the best.

This was a good game, I enjoyed playing it.

I don't want to be a dick but this has nothing original just assets that too many so called devolopers use to trick player to believe that they have made everything from scratch but in reality have really no talent in game developing whatsoever.

Have something original instead of copying others

It's not even about the assets anymore... My problem is that he hasn't updated this game in ages! It's still beta!

Using assets is not wrong at all. The game itself is original. Especially when learning, it's important to focus on the map making, story, gameplay, and not waste time with modeling and shading thingds that you can get free to use. No talent in game developing? The game design is his own, so you played yourself.

Never said that there's anything wrong using assets (It's just a dick move not to mention that they used them if you aske me!) and I've seen this kind of game design that you say to be his own in many other games so there's nothing original in this like whatsoever...

This was a really nice game minus what others spoke about. The zombified attacker doesn't really die; it just walks back to its original spawn point, a flashlight would be helpful in the pitch black areas, medpacks, and more ammo laying around if you intend on adding more enemies.

Again, it's a nice game that has a great atmosphere. Keep it up!

Loved this game! Hope it actually becomes a full game! :)

This is a very well made game! Has a high quality feel to it! Great buildup of the story. Spooky environment. Here's my playthrough:

Enjoyed the demo. Nice atmosphere and ambient sounds. Enemy was a bit hard to kill, even with the gun. I actually played a second time and attacked with the machete. Nearly died and played the rest of the game with a red screen and no way to heal. Maybe consider adding a few med packs to the game.

After slashing the very first enemy about 10 times and shooting him 4 times in the head I died. That tells enough about this game. Had potential, but didn't provide in the end.

An interesting Demo, waiting for the full rellease!!

Here is a short video we made while playing:

This demo is too short but slightly good.

PROS: The graphic is pretty good, indeed, the quality of the model, the lighting and visual is well done. I like the setting and how it's "decorated".

NEUTRAL: It's a classic gameplay that you can see everywhere. Find a locked door, find a key, open the door, find a fuse to restore the elevator, ecc... This is good but not exciting.

CONS: The combat system is not good. The enemy hurts you easily if too close to you and using the machete is too "odd".

Had a ton of fun playing this short indie horror game! I don't know in which state Exiles currently is, but you need to make this happen!
Really loved your work and that spooky environment you've created!
Here is my attempt of making something good with your game and my commentary combined XD
> >

Reply
TheScarletBlaze4 years ago
Really good little indie game with some promise gives classic Survival horror vibes and has you do more than find items and run away from a monster this change of pace is always refressing in itchio titles cant wait for the full realease.
Reply
LordofNope4 years ago
The opening was really well put together so there's definitely potential. though it peters out once you leave that area. Keep up the good work and good luck!
Reply
Mr_Snackypants4 years ago

Whenever I start a new game, it's completely black except for my feet. It's almost like I keep spawning on top of the map. I tried running but it's just endless. Does anybody have a solution? (Yes, I tried restarting it a couple times.)

The demo was missing a lot of things to make me completely interested in the full game but it did look really good.

i started a new game and the camera is spinning is that meant to happen?

i started a new game and the camera is spinning is that meant to happen?

Although I have not played the game, I love the art style from the pictures I saw. I will give the game a try. I will keep you updated.

36 playthrough videos of a game that takes about 20 minutes to play. Does nobody else think that's ridiculous? Seriously, after the first four or five have been made, you are contributing nothing.

Anyway this game looks amazing. The one enemy you face needs a lot of work (movement, reactions, damage) but good on you for throwing one in.

BTW I'm tipping you 10 bucks so you can continue your efforts :)

Reply
ferocioustoast4 years ago
This game is pretty fun, could be spookier. I am looking forward to more!
Reply
Cyberwolf4 years ago

Super well made game! Ive seen games that don't even compete with this made by groups so there fact this was all done just by yourself is amazing, good job! The first time I played it, it had me on the edge of my seat the entire time waiting for scares that never happened! Had almost no problems with the game but the fist time I played it the zombie didn't die, and in the video I made could barely even hit it. Other than that, awesome game and I can't wait for a full version! Hope you enjoy the video!

I think you should work on making the zombie animations and behavior more threatening. When I came to the first zombie I was a little bit spooked but almost kind of chuckled seeing his reactions to getting shot seemed so goofy to me.

an amazing game but why i have to paid!

Reply
The Fringe4 years ago

Love this game.. It really keeps you on edge throughout... Feels a bit like Outlast..  Looking forward to seeing the developments you make

I honestly think this game cured my cold. It is that fun to play!

That may not make sense , but seriously you need to play this game. Or at least watch me suck at it. Considering this is the work of a solo developer, I think it's really good. Well done mate.

Not a bad demo, the story could use more depth, but the atmosphere was really nice!

I really liked the demo so far a few bugs, but overall a great game with a killer atmosphere. I hope to play the game when it launches fully. Check out my video to see it for youreself.

I liked the design, but I did find it to be very generic among most unity style games. Some diversity and changing up the props would go a long way in making it stand out. I have no idea how I missed the zombie boy until I turned around, that seemed like a great accidental scare as when I was John Wolfe play it afterwards he was clearly visable but it was definitely one of the more frightening moments.

After picking up the bedroom key, I absolutely could not figure out where to go.

Some things I liked about Exiles: There are genuine stretches of dread that are caused primarily by level design. There is a section where there are two floors. I avoided going down the bottom floor (because it's scary!!), so I instead did everything there was to do on the first floor until there was nothing left and I had to go down stairs. That had me flustered.

The way the visuals are shaded makes the game look like it's made of clay or velvet. That's great! It makes Exiles look fairly unique among the plethora of horror games that go for photo-realism. The blurring and lighting effects also look fantastic! The scary strings that kick in when the zombie boy appears made the whole encounter even more stressful.

P.S. there's a bug at the end of the video that you should absolutely keep in the game. 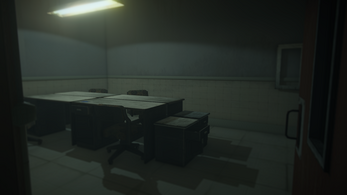 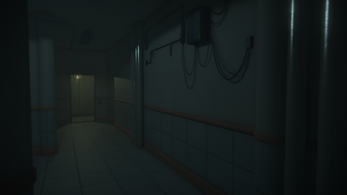 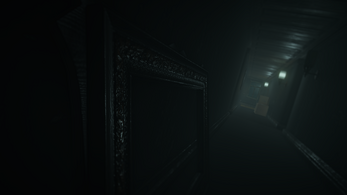 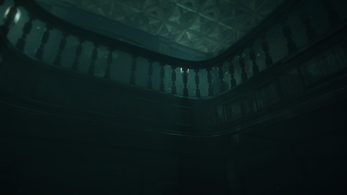 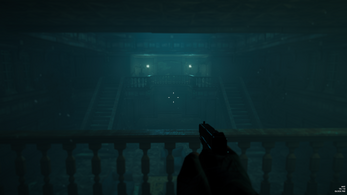 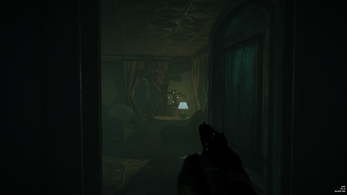